A recent OPAGGA (Office of Program and Policy Analysis & Government Accountability) Study performed for the State of Florida showed that public adjusters settle property insurance claims for more than 8 times the monetary compensation as insurance company adjusters would offer without a Public Insurance Adjuster involved (www.oppaga.state.fl.us).

When a homeowner Association filed a property insurance claim, the insurance company originally only provided the insured $2 Million Dollars. We settled the claim for $28 Million Dollars, making this one of the single largest Hurricane Wilma claim settlements in South Florida.


What is the advantage of using a Public Insurance Adjuster?

Public adjusters file the claim on the policyholders behalf and negotiate a satisfactory settlement with the insurer. Public adjusters are the only kind of adjuster that works executively for you. In the process of filing your claim, you will probably encounter different types of adjusters.

At TAG (The Adjusters Group, LLC), our licensed and bonded Public Adjusters work exclusively for you, the policyholder, never the insurance company. The Adjustors Group is an authority in loss adjustments, offering over 9 years of experience in managing commercial and residential insurance claims for the policyholder, along with 30 years in the construction industry. Our goal is to ensure our clients a prompt recovery of the most reasonable compensation for their claim. We do not receive a fee until your claim is paid.

How TAG can help you? 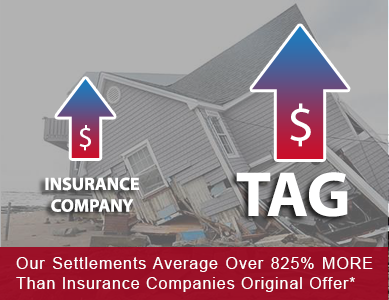 *Percentage is based on total of all claims handled. Individual claims vary. Some claims settle for less than the 825% and some settle for more. "Original Offer" means: The monetary amount the Insurance Company originally estimated the property Damages value as, and offered/paid to the insured in order to induce settlement of the claim.

Thanks for contacting us. We will responde back to you soon!